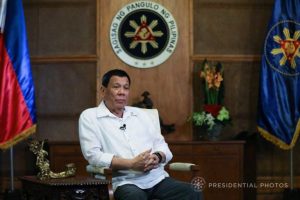 Reading the recent notice of the Philippines’ withdrawal from the Rome Statute filed at the office of the United Nations Secretary General, one gets the impression that there are people in the present administration who equate the Duterte presidency with the Philippine state. They should be reminded that we are not an absolute monarchy. Not yet, anyway.

The quote “L’état, c’est moi” (I am the state), commonly attributed to the French king, Louis XIV, has been declared apocryphal. Yet, it is what comes to mind when one is looking for an apt summation of a ruler’s delusion that he can do anything. Mr. Duterte’s supporters might benefit more from knowing what Louis XIV was heard to have actually said at his deathbed: “Je m’en vais, mais l’état demeurera toujours” (I depart, but the state shall always remain).

The Philippine state will be there long after Mr. Duterte is gone. Indeed, the International Criminal Court’s preliminary examination of the mass killing of drug suspects in the country, that began before the notice of withdrawal was sent, will continue even after the termination of our ICC membership takes effect. The ICC itself may decide to preserve the relevant evidence and documents, and pursue the case against the high civilian and police officials responsible for the mass murders, long after the Duterte presidency has ended. Even if the Philippines is no longer an ICC state party, a new Philippine administration may lodge a declaration with the Registrar of the ICC under Article 12(3) of the Statute, accepting ICC jurisdiction over these crimes and pledging full state cooperation. Ukraine, a nonmember, did this in 2015.

The president of the republic may indeed be the chief architect of foreign policy.  But this is not the same as saying he or she alone is knowledgeable about where the world is headed, or that he or she is solely responsible for our relations with the rest of the world. If the ratification of our membership in the ICC needed the concurrence of the Senate, why shouldn’t our withdrawal from the ICC be subject to the same condition? Like Mr. Duterte, the senators represent a nationwide constituency.  At the very least, an attempt to get the public pulse on so important a question as this would have been in order.  Our reasons for withdrawing should have been clearly spelled out, and, more important, sharply differentiated from the President’s personal pique over the possibility that he himself might be investigated by the ICC.

For a nation that has willfully deployed tens of millions of its own citizens to job destinations abroad over the last four decades, it is astounding to hear our political leaders mock the importance of a global legal order as though it were nothing more than an expensive ornamentation for which there is no real need. They cite the example of populous nations like the United States, Russia, China, and India that have refused membership in the ICC to justify their own skepticism.

These nations are big powers that are fully aware of the complex reasons behind their nonmembership. Their reasons are not necessarily ours. Compared to them, we are a small country that is perhaps far more likely to fall victim to the specific crimes that the ICC seeks to penalize and prevent. The vast masses of our people — poor and exploited and with little access to the law—are far more likely to become victims of crimes of impunity than their rulers. It is they who need the ICC, not the powerful dynasties that run the country and often cannot be touched by the dysfunctional justice system.

A little known function of the Rome Statute that created the ICC is that it serves as a prod for nations to upgrade their justice systems to the level of generally accepted universal norms.  Behind the principle of “complementarity” that is at the core of the ICC philosophy is the rule that jurisdictional priority belongs to the domestic courts, but that the ICC will assume jurisdiction if, in its view, a country’s prevailing justice system is unable or unwilling to investigate and prosecute the crimes the Rome Statute expressly penalizes.

It may not be easy to imagine such instances as the latter, until one comes across an example like Cambodia under Pol Pot.  Here was a regime that came to power in the confusion created by the war in neighboring Vietnam. When the Khmer Rouge took over, they inaugurated a brutal system that sought the destruction of Cambodia’s urban society and economy in order to establish a party-directed revolutionary experiment centered on the countryside. Millions of ordinary Cambodians died in killing fields that, to this day, stand as mute witnesses to the genocide unleashed by a political leadership on its own people. Years after the Khmers were crushed, the Cambodian political order had remained so unstable that nothing less than an international tribunal was needed to bring the Khmer criminal leaders to justice.

Can a government turn against its own people? Can a people be so blinded in their admiration for their leaders that they may not notice the harm that is being done to them until it is too late?  And if that happens, would toppling such a regime be sufficient to start the process of healing and rebuilding? Would justice have been served once forgiveness and reconciliation are attained?

My reading of the philosophy behind the creation of the ICC tells me this: If we want a world that allows no room for impunity, humanity must have recourse to a supranational mechanism for exacting accountability and dispensing justice, even where the actual victims themselves may have forgiven their oppressors.